7 Fun Games To Play With One-Year-Olds

There is nothing brighter than a sound of child’s laughter. But when you spend hours and hours a day entertaining a one-year-old, it’s easy to forget the joy.

Below are seven games to play with kids. Some of them are all-time classics, such as peekaboo, and others we discovered by playing around and receiving a delighted laugh from Rohan. So we took note and developed them into games.

Give these ideas a go, and watch your playtime transformed from mundane to magnificent!

1. Playing In the Sand

For an easy (and cost effective) sandpit solution in a rental house, we opted for 2 clam shells (from Bunnings for about $12 each). We filled the first shell with three 20kg bags of “play sand” (Bunnings also, $7.75 each). The second shell is used to close the sandpit after playing to prevent moisture and uninvited critters from entering the sand. In the summer, the second shell also works as an improvised bath to wash off the sand after a play session. Fill it with warm water and watch the sand remove itself through vigorous splashing :). Double the fun.

In the winter the sand is quite cold and wet, so we encourage Rohan to play outside of the sandpit, rather than in it. He is perfectly happy with the alternative, as long as he can pick up the sand and throw it around.

Oh, he’s said “ma ma” and “da da” before, as babies do. But “ma ma”, for example, can mean many things: hungry, in need of comfort, or calling form me (surprise surprise). But “ba ba”, oh no, do not mistaken “ba ba” for a grandma. “Ba ba” is bubbles!!! And nothing else. Rohan knows where the bubbles live on the shelf. He goes to the spot and stands there, yelling “ba ba”. Ignore the call at your own risk!

There is a number of soap bubble recipes on the web. Most include dishwashing soap, water and either glycerine or sugar.

We tried Castile soap at home. While it’s fantastic for nearly every task, it does NOT make good bubbles. It seems silly to buy dishwashing soap just to mix up some soap bubbles. So we got a giant bottle of pre-mixed non-toxic soap bubbles instead.

Just a word of warning: DO NOT let the bubbles go into the baby’s eyes. And minimise contact with the skin as much as possible. If a bubble does pop right into the baby’s eye (of course, that happened!), rinse the eye and face with warm water and brace yourself for a few minutes of wailing.

Plastic or paper, anything that can be stacked is minutes of repeatable fun. Sometimes in the middle of dinner prep, I just need a few minutes of freedom to do a complicated culinary manoeuvre, while Rohan, of course, wants to be part of the action. That’s when I reach for a stack of stackable somethings (preferably something he hasn’t played with before), and it can give me 5-10 minutes of free hands.

Stacking cups also work well during meal time. Rohan sits on his high chair stacking away, while I keep packing away the food into his mouth.

4. Playing With Pebbles and Sticks

This one is a winning game for the outdoors, but only play it with your child if you are absolutely confident that he or she is ready. Small rocks can be a choking hazard if your baby is still putting everything in the mouth. And sticks are a poking hazard to the baby and the parent. This is a game played at your own risk.

With the disclaimer out of the way, this is one of Rohan’s favourite games. A box full of pebbles makes noise when shaken. It makes a beautiful mess when the box is opened, and it satisfies the packing-unpacking instinct that babies seem to have. Rohan flips the box to make all the pebbles fall out, and then puts them back in one by one. It also helps develop his finger dexterity.

The sticks are good for banging on things and for pocking the ground (or pebbles). If you have access to the outdoors, you can collect a few thick branches and round off the edges to make them into safe natural chewable toys. And they make beautiful objects for the play area.

Rohan finds it hilarious for some reason to see a stick poking out of my mouth. Sometimes during a nappy change, when I need to keep his attention (or he’ll run away), I just take a stick in my mouth and let him marvel :).

Peekaboo is a classic game played with kids, where a parent hides his or her face and then pops into view saying “Peekaboo!” You probably already knew this.

We’ve developed a few variations of this game:

The swing at the playground is a winner, of course. But we’ve also discovered a few surprising ways to re-create swing action around the house.

As mothers do, I often fold the washing while watching Rohan. After the clothes are dry, I would carry the basket to the closet where they will be folded. What to do with a baby? Put him on top of the clothes, of course! That’s how it began. Now that he is bigger, I don’t risk putting him in the hamper with clothes in it, as he can topple. But I often put him in the empty basket and push him around the house. Or if I am feeling particularly strong, I lift the basket off the floor and rock him in it, like a little boat on choppy seas. Just be near a safe surface, in case the basket slips or breaks.

Books, books, books. We’ve placed books all around the house at a height where Rohan can reach them. We have an island bench by the window with a stack of books and a nice flat area to open them. At one year, Rohan is quite happy to stand by the bench and flip through the books. Oooh, 5 minutes of peace and quiet, how sweet you are!

Not all the books he likes are children’s books either. One of his favourites is “Unmasking the Face” by Paul Ekman and Wallace V. Friesen. It has pictures of many-many faces expressing various emotions. Rohan LOVES to flip through the pages and point to the “funny” faces.

Here are some of our favourite books. They have beautiful artwork, meaningful words, and they don’t seem to get old.

Rubber balls (the kind you get for 2 bucks at Big W) work best. They are the right size for the little hands, they come in many colours and the BOUNCE! You can buy a few and watch the child chase them around the house.

Tennis balls work pretty well too. Or any ball shape, really. Fill a basket with balls and enjoy a cup of tea while the munchkin is “busy”.

The challenge here is to later teach the child to distinguish between balls that like to bounce, and apples, which really don’t like to bounce! Ha ha. 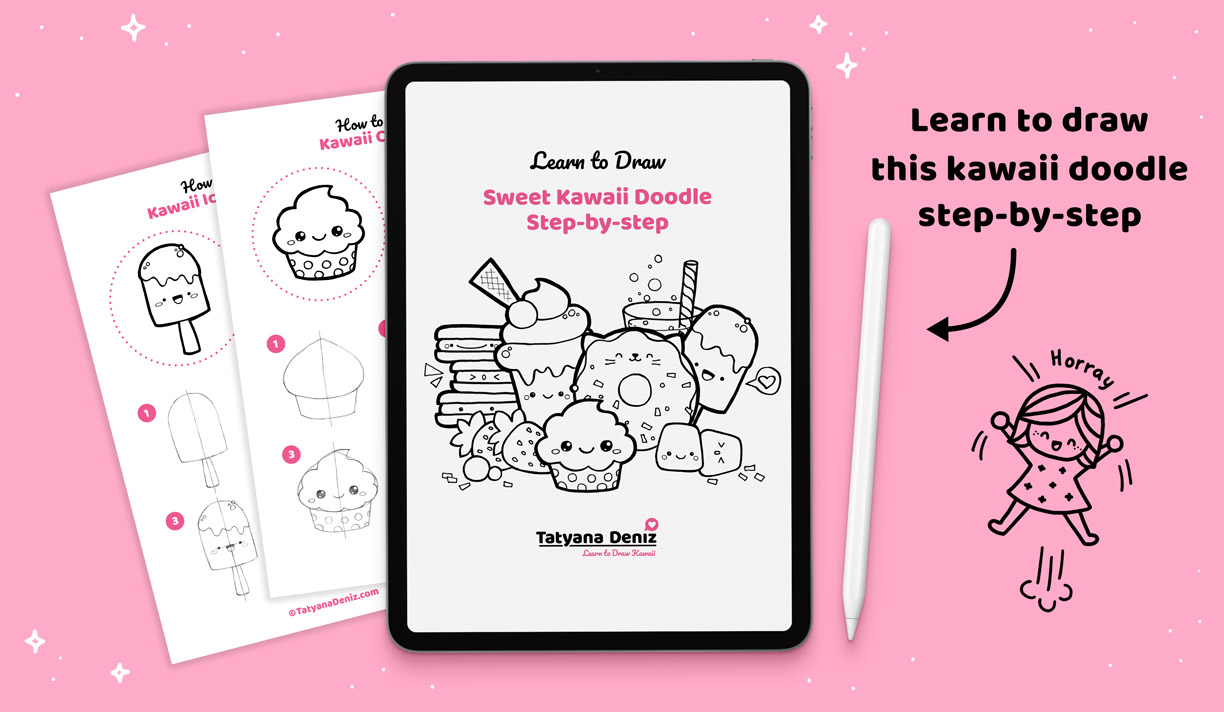 ​Download FREE mini-course with ​7 ​easy step-by-step tutorials to ​learn how to draw this kawaii doodle.

​​You will also ​get my future tutorials and updates.​ Don't like them? No problem. ​​Unsub with 1 click.

Please check your email to find your ​download link​ :)

​And if there is anything I can do for you in the meantime, please email me directly at tatyana@tatyanadeniz.com